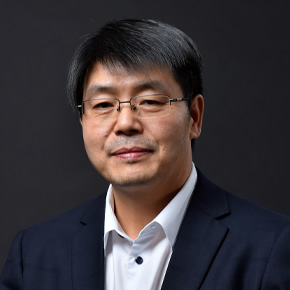 Dr. Shao’s research lies at the interface between bacterial pathogen and host immunity. He identified most of the known cytosolic pattern recognition receptors for bacterial molecules, including caspase-11/4/5 for LPS and ALPK1 for ADP-heptose (a precursor for LPS biosynthesis). He also identified gasdermin-D (GSDMD) whose cleavage by caspase-1/4/5/11 determines pyroptosis, which is critical for septic shock and other inflammatory diseases. His research further establishes the gasdermin family of pore-forming proteins, therefor re-defining pyroptosis as gasdermin-mediated programmed necrosis. Among the family, GSDME is activated by caspase-3, which occurs mostly in noncancer cells and contributes to the toxicity of chemotherapy drugs. His most recent work demonstrates that pyroptosis is a critical mechanism underlying lymphocyte cytotoxicity and gasdermin activation in cancer cells can stimulate potent antitumor immunity.

Dr. Shao received his Ph.D. from the University of Michigan and B.S. in chemistry from Peking University.